Adventures in faith and fatherhood

One of my favorite “dadventures” is to find new and amazing dishes and restaurants wherever we travel—whether that be in another state or country or in our own neighborhood. My kids are great about trying new things, probably because trying new things has been the norm for them since they were young.

When we travel, our itinerary often revolves around the restaurants and cuisines I want to experience in that city. It is always an adventure, because we may discover the best thing we have ever eaten…or we may find something we never want to taste again! Either way, it’s exciting!

This is a list of the best things I ate in 2018. The items on this list are not just really good foods; they are flavors I cannot stop thinking about! I have honestly thought about each one of these at least once a week since I ate them, and for the foods at the top of the list, it’s more like a daily fixation.

In addition, the items on this list are ones that I had never tried before, or it has been years since I’ve had them. That’s why you won’t see as many of my St. Louis go-tos, like the Brisket and Ribs at Pappy’s and Sugarfire or the Chicken Parmesan at Anthonino’s Taverna.

This started out as a “Top 10” list, but we traveled to 10 states just on our family vacation this summer! I also visited nine other states and explored all around my own state of Missouri. There was just no way I could only include 10 items! So, I upped it to 25 things (with a few honorable mentions), and I am breaking it up into a blog series with five items per blog post.

Very Fresh Noodles is one of the amazing food options in Manhattan’s Chelsea Market, a food-lover’s paradise. At Very Fresh Noodles, they hand pull the noodles every day. There are only four dishes on the menu, but I still had a hard time choosing between some very delicious sounding items!

I went with the Beef Noodle Soup, as I thought it would be the easiest for my kids to handle. Well, they definitely handled this soup, alright. They couldn’t get enough! The soup is full of fresh noodles and tender beef shanks. It’s accentuated with some greens, scallions, and cilantro, with just the right amount of chili oil to give it a kick that didn’t make my kids coming back for more. (On second thought, maybe I should have gone with the spicy version.)

We had fun slurping down the noodles, and the beef was so tender it nearly melted in our mouths. And the broth! I could put that in a mug and drink that all day.

My advice: take your family to New York City and head to the Chelsea Market. Then, split up and grab food from different food stalls. Just make sure the Taiwanese Beef Noodle Soup from Very Fresh Noodles is on your list!

This was totally unexpected, because Open Hearth Inn is not a restaurant. They don’t even sell food. It’s, well, an actual inn right outside of Acadia National Park. We thoroughly enjoyed our stay at the Open Hearth Inn while exploring Acadia for a few days back in July.

The cabin was great, but the best part was the homemade muffins at breakfast. The owner, Anne Rau, wakes up early every morning to make fresh muffins for the guests. It’s the only thing available, besides tea and coffee. No omelets. No bacon. No sausage. And I didn’t even care. One bite of that chocolate muffin made me forget about every other breakfast food.

I know what you’re thinking: “How can you put a motel muffin on your list of the best things you ate, Michael?” It surprises me, too. I don’t even care about muffins. But this was no ordinary muffin. It was so chocolatey, with a little crispness on the outside and a perfectly dense-yet-soft, moist interior.

These muffins are so good that my 10-year-old daughter mentioned them last week. Six months after we ate them! Has any hotel breakfast ever made that kind of impression on your kid?

Anne mixes up the flavor options each morning. My kids also really enjoyed the triple berry muffin. Whatever you like, you will be sure to find one that instantly takes you to breakfast bliss.

If you’re headed to Maine, book a night or ten at the Open Hearth Inn, just so you can get these muffins. Trust me.

I am a huge Seinfeld fan, so I totally geeked out when we planned our trip to New York City. I wanted to visit every location from the television show, but Shelly had to reign me back in.

We did manage to visit a few locations, including The Soup Man. Even if you’re not a fan of the show, you have probably heard someone sternly say, “No soup for you!” This quotable line and classic episode were actually inspired by a real restaurant and chef. In the 1980s, Ali “Al” Yegneh developed quite a reputation for amazing soup and very particular ordering etiquette. Despite his harsh exterior, people flocked to his soup stand because the soup was incredibly delicious.

And it still is. I ordered the jambalaya (obviously). This jambalaya is actually a soup, rather than the classic form you will find in Louisiana. I’m not a huge soup eater. (Yes, I know that two of the three items so far on this list are soups, but it is still rare that I order soup.) And the jambalaya at The Soup Man contains shrimp, which I don’t really like. (They’re basically giant water bugs that smell like sweaty feet that stepped in dog poop.) But I would order this again in a heartbeat.

The broth was so savory and creamy, and it was chock full of rice, sausage, and…shrimp. But I didn’t care that this nefarious bug was submerged in my soup. I was in soup (and Seinfeld) heaven!

Oh, and you know I did the whole Newman “Jambalaya!” thing.

If you’re in Manhattan, get to The Soupman and order some jambalaya. Just remember the rules. 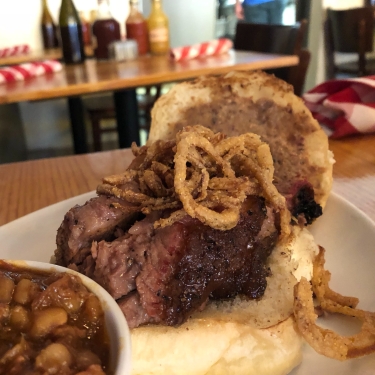 Brisket is one of my favorite things ever. Ever. Pulled pork is great, but brisket is superior. (Sorry to all my friends in the South.) Tender, smoky, salty, beefy goodness.

I had been hearing good things about Salt + Smoke for a while, but I have to admit that I was a little skeptical. Typically, the best barbecue is found in some hole-in-the wall place in a scary part of town, or in some roadside shack in the middle of nowhere. Salt + Smoke, on the other hand, is in the Delmar Loop, a trendy area of St. Louis more known for hipsters than pitmasters.

So, with my skepticism in hand, I ordered my beloved brisket, hoping to be surprised.

This might be the best brisket I have had in St. Louis (and there’s strong competition from Pappy’s and Sugarfire) and some of the best I’ve ever had. I was surprised how smoky it was, considering I couldn’t see the smokers. It turns out they were hiding around the corner. They smoke their brisket for 14-18 hours using post oak—the perfect wood for brisket!

If you’re near St. Louis, get to Salt + Smoke right away and order the brisket. Get the fried pickles for an appetizer, and you can’t go wrong with the beef fat fries, pit beans with smoked bacon, white cheddar cracker mac, creamed corn, or brisket chili for sides. 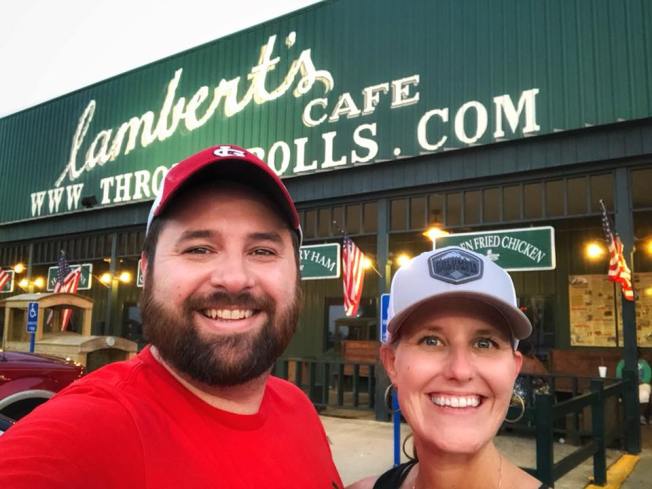 Lambert’s is famous around these parts for huge portions and “throwed” rolls. I hadn’t eaten at Lambert’s since I was in high school, but Shelly and I stopped in while on our way to Memphis in June.

I am actually having a hard time remembering what I ordered. I know it was good, but the “pass arounds” were outstanding! After you order, servers come by every few minutes with the Pass Arounds—unlimited servings of fried okra, macaroni and tomatoes, black-eyed peas, fried potatoes and onions, and apple butter. They also throw you hot rolls the size of your head!

It took me back to the many meals I enjoyed growing up in Oklahoma. Comfort food with a connection to my past. (For several reasons, I don’t have as many opportunities for these delicious foods nowadays.) Deep fried, buttery, salty, savory. My favorite.

There are three locations—the original in Sikeston (southeast Missouri); Ozark, Missouri (near Branson); and Foley, Alabama (near Gulf Shores). Get to one and enjoy some pass arounds. You can even order just the pass arounds for about $10!

Stay tuned for the next five items on my list of the best things I ate in 2018!