Adventures in faith and fatherhood

I am counting down the 25 best things I ate last year. If you haven’t read part 1, check it out here.

Surprisingly, sweets are not usually a big deal for me. Sure, I love some cheesecake, and I enjoy a cookie or ice cream occasionally, but I don’t freak out about them like most people do. (I do tend to freak out about smoked, grilled, or cured meats.) That’s why only five of the spots on this list contain sweets.

But every once in a while, a dessert comes along that I cannot forget. The cupcakes at the Silos Baking Co. were just such a dessert. Cupcakes are another thing I don’t usually care that much about. They can be hard to eat. The icing is usually overly sweet and has a weird texture. And the cake is usually dry and crumbly.

They were beautiful to look at, and they were even more beautiful to eat. The cake is moist and is tasty enough to eat on its own. The icing is smooth with just the right amount of sweetness. It won’t set your teeth on edge; instead, you’ll want to order a bowlful of it with a spoon!

The experience at Chip & Joanna Gaines’ Silos and Magnolia Market is fun for the whole family, and, while the line out the door of the baker can be daunting, it moves quickly, and the cupcakes will make you forget about the wait…and just about everything else! 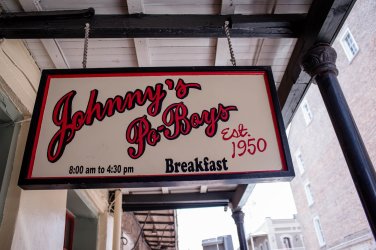 When most people take a trip somewhere, they compile a list of sites they want to visit and activities they would like to do. I do that as well, but those lists often develop after I compile my list of foods I want to eat and restaurants to try.

Shelly and I had about 27 hours in New Orleans back in June, and my list included beignets (especially from Cafe Du Monde), muffuletta, jambalaya, red beans and rice, and a po-boy. If you’ve never had a po’ boy, you’re missing out. If you don’t know what a po-boy is, it’s a popular sandwich in New Orleans (and throughout the Gulf Coast) that typically consists of fried seafood or roast beef with gravy served on French baguette.

Since I’m not a huge seafood lover, I opted for the Johnny’s Special at Johnny’s Po-Boys in the French Quarter. It’s roast beef and ham with cheese, gravy, lettuce and tomato. The gravy makes it similar to an Italian Beef—deliciously messy.

This was comfort food in sandwich form. Roast beef and ham covered in gravy…are you kidding me?!? Then, you put it on a baguette with a crispy crust and fluffy interior?!? What’s not to love?!? Why do I keep asking so many questions?!?! Because my mind was and continues to be blown!

Okay, now I’ve got to figure out where I can get a po-boy in St. Louis, and you need to get to Johnny’s in New Orleans!

We are fortunate to live within walking distance of some amazing bakeries and coffee shops. Sucrose moved into the neighborhood a couple years ago, and they changed us forever!

Again, sweets aren’t as big a deal to me as they are to most people (that’s why my favorite at Sucrose is a savory croissant), but the sugary artwork Sucrose constructs can even start to pull this umami lover to the sweet side. I didn’t really know what a macaron (not macaroon) was until Sucrose, and now, I’m slightly obsessed. I could go on and on about the tarts, cheesecakes, pies, brookies, and various European sweets, but what I really want to focus on is the croissants!

I have to admit, the vast majority of croissants I have eaten came from a tube. So, I was blown away this past fall when I finally had a REAL croissant from Sucrose! They had that perfect crispy exterior with the soft, flaky interior. But the center was filled with extra goodness! One had bacon and caramelized onion—which was fantastic—but even better than that was the ham and cheese with rosemary! Flavor bomb! The flavors played together perfectly, and the warm, flaky, buttery croissant in which they were wrapped….I can’t even think straight now! Give me just a second.

So, now I know what a real croissant is supposed to taste like. That’s good and bad. Obviously, it’s good, because these flavor bombs are made just a few blocks from my house. But it’s bad because they only make them on Saturday, and the day I’m writing this is Thursday, and I want one right now. And every single day. Well, at least I know where I’m going Saturday!

If you are in the St. Louis area, head over to historic St. Charles. You can explore all the shops and restaurants along cobble-stoned Main Street, learn about the journey of Lewis and Clark (which began in St. Charles), and visit the first capitol of Missouri. But don’t forget to hit up Sucrose for some quality coffee and sweet treats or savory quiche. And I’ll see you there on Saturday in line for croissants!

I know. St. Louis loves frozen custard. There’s a frozen custard shop on every other corner, and we’re famous for a particular frozen custard stand. (And if you’re ever visiting St. Louis, you should definitely stop by Ted Drewes (https://teddrewes.com) on Chippewa and order one of their concretes.)

But, while ice cream, froyo, custard, and gelato are similar, gelato has a distinct personality. (https://www.foodnetwork.com/fn-dish/news/2015/06/gelato-vs-ice-cream-whats-the-difference)

It starts with the texture. Gelato is creamier and denser than ice cream. It’s silky and has a way of dancing on your tongue instead of just freezing it. Gelato is served a few degrees warmer than ice cream, and it has less butterfat and air than ice cream. All of these combine to give gelato a denser, richer flavor and texture than other frozen treats.

Okay, so enough about gelato in general. Let me tell you about Gelato Di Riso and their delicious gelato.

Gelato Di Riso is located in the The Hill, one of my favorite St. Louis neighborhoods. The Hill was settled by Italian and Sicilian immigrants in the late 1800s and early 1900s, and it is still predominantly populated by Italian Americans. There are many incredible spots for awesome Italian fare in The Hill, but our family’s pick for dessert is Gelato Di Riso.

My favorites usually include something with chocolate: mint chocolate chip, bacio (chocolate and hazelnut), espresso chip, or stracciatella (chocolate chip), but I also love their sorbetti, sorbets made with real fruit, like blackberry, mango, raspberry, and blood orange.

I have eaten gelato in a lot of different places around the country, and I have never had one that wasn’t amazing. But the gelato at Gelato Di Riso is my all-time favorite.

When in St. Louis, you must visit The Hill. Try some toasted (read: fried) ravioli at a place like Anthonino’s Taverna or Mama Toscana’s, but save room for a flavor explosion at Gelato Di Riso.

I discovered BB King’s and their fried pickles when I was a college student in Arkansas. I had never even heard of fried pickles until my first visit to BB King’s. (I grew up in Oklahoma, believing we lived in “The South.” I also thought we fried a lot of things. I discovered a whole new world when I went to college 3 ½ hours east in Arkansas!)

The first time I bit into a fried pickle at BB King’s nearly 20 years ago, I was transported to a whole new level of culinary bliss. The tang and crunch of the dill pickles covered in perfectly seasoned, crispy breading is a match made in deep fried heaven.

Most places serve their fried pickles with ranch dressing—and it’s a great compliment to the pickles—but BB King’s ramps up the flavor with a horseradish dipping sauce. It’s got the right amount of kick to make your tongue tingle and your hand keep reaching for more.

It had been a few years since I had been able to get to BB King’s, but I was finally able to introduce Shelly to one of my favorite spots for delicious food and live music this past June. We had a blast together (without kids) enjoying dinner and a fun, blues-rock band.

The rest of the menu is great; Shelly said her burger was one of the best she has ever had, and I loved my chicken and waffles. But it’s the fried pickles and live music that continue to draw me back after two decades.

I have eaten fried pickles in a lot of different places—from Nashville to Tulsa, and Houston to St. Louis. But the fried pickles at BB King’s are….well, King.

Beale Street is a must when visiting Memphis, and BB King’s is the perfect spot for great food and live music. Whatever you order there, start with the fried pickles. You’re welcome.

Are you drooling, yet? I’ll post the next five best things I ate next week!